Yet another spontaneous theatre trip for myself along with my sister and her kids. A thoroughly enjoyable one at that.

If the title sounds familiar it a classic adventure novel by the French writer Jules Verne, published in 1873. Or more commonly known by the movie adaptations in 1956 and its later more (very) loosely based rendition in 2004 starring Jackie Chan. The latter being a movie I watched and enjoyed as a child.

The stage production started at the New Vic Theatre from 23 June to 8 July then proceeded to tour the rest of the country and has landed in Cadogan Hall from 2 August until 2 September before proceeding to its next leg of the tour.

The entire play follows the miscellaneous adventures of the rich British gentleman, Phileas Fogg, and his faithful valet Passepartout, full of contagious energy and joy as they travel around the globe. The entire cast evidentally put their all into the each performance with just eight actors pulling off 109 characters is not a small task.

Particularly, Michael Hugo who plays the lovable Passepartout – multitalented as can be from bullet catching to improv ukulele and singing combo. Bouncing up and down the stage. He is possibly the most loved character and the heart of the show (well… I loved him).

Cadogan Hall is former church converted to a 950-seat capacity concert hall in Sloane Terrace (Central London). It provides a nice stuble atmosphere that action on stage, the welcoming staff allowed you to just relax and enjoy the show.

I do have a major complaint – the seats in Gallery were basically church benches with cushion. I would have nothing against it if it weren’t for being one of the most uncomfortable seat I’ve ever sat on. It may be due to my posture or height but my legs were numb at the end of the night. 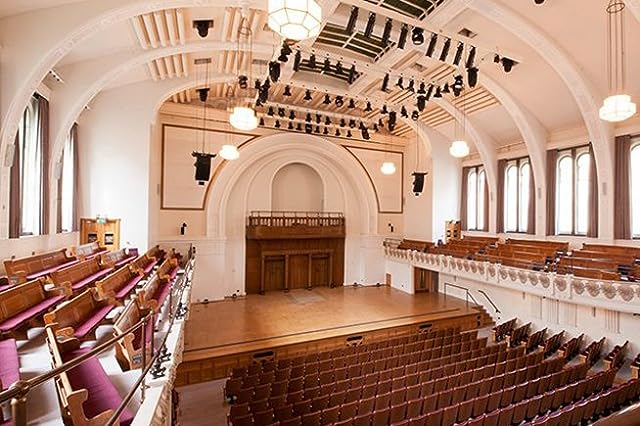 I loved it. Maybe, I’m easily impressed but I left theatre with a beaming smile on my face. Despite, being legally an adult I’m just a big kid who’s a sucker for a good laugh and Around the World in 80 Days certainly delivered that childish joy to everyone present.

Even with not being to feel anything from the waist downwards – it was worth it.

To see whether the production is going to land in a theatre near you, click here.