I was proud of my anime movie review up within a week or so reviews.

Otherwise, this particular one is by far one of the longest things I’ve postponed other than my product reviews and I’ve been guilty ever since (basically for a month and two weeks now).

If you want to see this movie without knowing a single thing whatsoever I advise you to leave immediately.

Without any rather ado, I present to the wartime drama: In This Corner of the World (Kono Sekai no Katasumi ni). 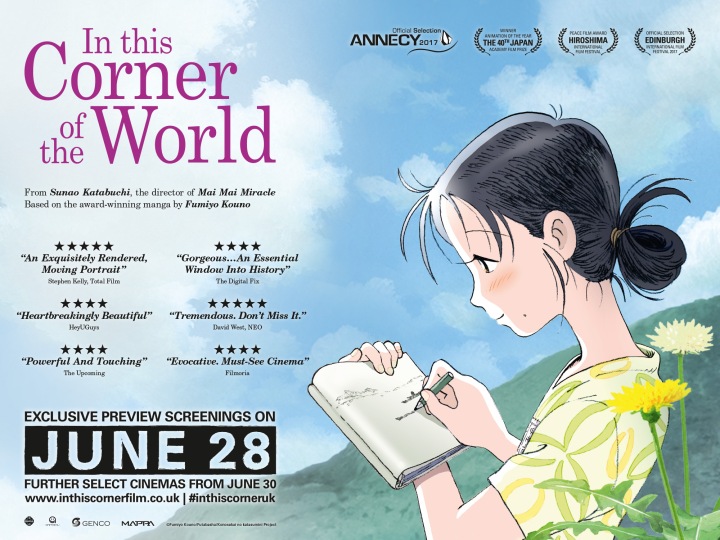 Whenever someone has a discussion of the saddest anime of all time, Grave of the Fireflies, film animated by Studio Ghibli back in 1988, always comes to mind. It is another heart-wrenching drama that has left a legacy in world-wide animation.

It has a reputation of moving its viewers to tears. I’m certainly one of the thousands who would admit that they cried (even my nephew who was re-watching it had full on broken down).

Though it is tempting to compare the two, I’m more inclined to draw parallels from the most established material as a point of reference for those who have yet seen In This Corner of the World.

Let’s things straight before you watch either of these be mentally prepared.

In This Corner of the World presents the wartime Japan though the eyes of contrast day-dreamer and doodler, Suzu, while she navigates the trials and tribulations of life as we witness her growth from clumsy child into a slightly less clumsy adult.

The essence of the film is perfectly described by the following comment:

I couldn’t have put it in any better way.

You couldn’t help but cheer for the quirky and endearing Suzu.

The calmingly mundane family interactions over dinner were actually a very insightful on how each of them dealt with loss and pain. It portrayed regular family life quite realistically from resentment for a particular sibling to uncomfortable tension due to attitude differences.

Each and every character no matter how major or minor all contributed to the portrayal of regular struggle at a very dark time of history.

The sweet subtle outlook of life that Suzu had was perfectly presented with the use of pastel colours and soft detailing – heavily soothing the sorrows of war. Compared to the sharp details and earthy colours used in Grave of The Fireflies, which focused the harsh realities of war. In This Corner of the World was focusing delicate beauty of life. 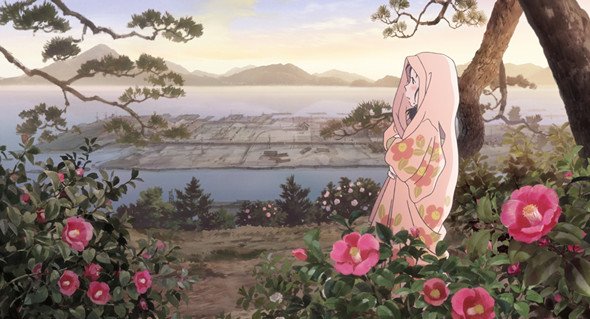 You just hoped for the best even with an underlying pungent feeling of dread throughout the film.

The voice acting, characters, art and music all cumulated the overwhelming bittersweet atmosphere of the film.

The heart-breaking loss and tragedy was balanced by the small daily achievements, love and care the characters showed one another at times of adversary.

It is undoubtedly a masterpiece and I highly recommend it (especially if you’re a sucker for drama).