Time to kick off July with a bang.

There’s no better way than celebrating Canada Day, a few months before my parents head off to Canada without me…

Canada Day is the national day of Canada. It celebrates the enactment of the Constitution Act of the July 1, 1867, so this year marks the 150 Year Anniversary all of over the world and in particularly in Trafalgar Square for UK-based Canadians.

The programme started with a skilful diabolo duo set piece as the crowd has yet to build up.

Then it proceeds with musical singing glory with Soul of a Man from Kinky Boots. Despite being based on a 2005 British Film, the musical has its roots from American and Canadian productions, garnering much success and critical acclaim.

No, unfortunately Bradon Urie is not Charlie in the West End production. I apologise to my fellow Panic At The Disco fans. However, the live Canada day performance was flawlessly sang by David Hunter (the current West End Charlie).

There was the classic comfort food of poutine as well as a chance to play a rendition of ice-hockey without the ice with professionals on hand show you the ropes in the middle of square.

To be honest with you, my initial companion had to leave, my phone was about to die and I was in dire need of a nap… Just to bump into a Trade Union March, just down the the road at Piccadilly Circus. Very reminiscent of the time when Austerity Cuts March occurred during West End Live 2016 while my brother and I were walking past Trafalgar Square. 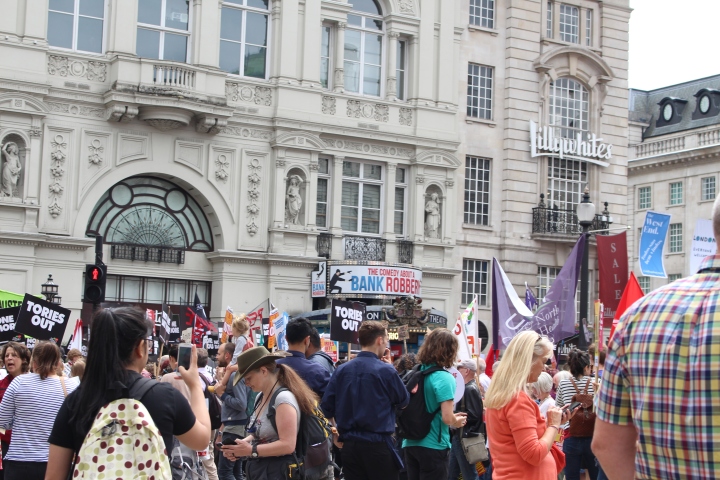 I returned to the square three hours later with both myself and my phone battery fully charged along with two new companions.

Just in time to see Daniel Caesar performance on stage.

Let’s just say, we chased Daniel and his band after the show along with a rather big flock of fangirls. We received hugs, chatted, taken pictures and later chilled with them that same night.

The shenanigans and hilarity it taken to spend time with a celebrity was all posted on my SnapChat story (and engraved in my memory).

Let’s just say I ended up in a questionable position.

It’s not as if I had anything else to do.

Any-who this day would make an amazing addition to my stories that I could share with my friends and future kids.

~spontaneous days out are the best~